This site uses cookies to improve user experience and optimize its performance. By continuing to use this site, you agree to use cookies for use on this website. Read more

Fuel types –  natural gas and various type of liquid hydrocarbons, such as regular gasoline, bio-diesel, commercial grade diesel, light and heavy fuel oil for marine and power generation industries (MGO, IFO, HFO etc.), propane (LPG), to name a few. Exception is the LNG fuel for which catalyst is not applicable.

Where is Green Fuel Catalyst to be installed? Installation on a marine vessel or on a stationary onshore engine for power generation needs is simple. Just locate a suitable place within the booster system after the mixing and heating units on its way to the Main Engine (ME) or the Auxiliary Engine (AE). It is very important to ensure that a multi pass effect is observed so that the fuel recirculated back from the ME or AE to the booster unit passes again through the fuel catalyst before being discharged back into the engine.

When installing in gas applications for power generation or heating, locate a suitable installation place for the catalyst and install with a bypass according to local requirements. 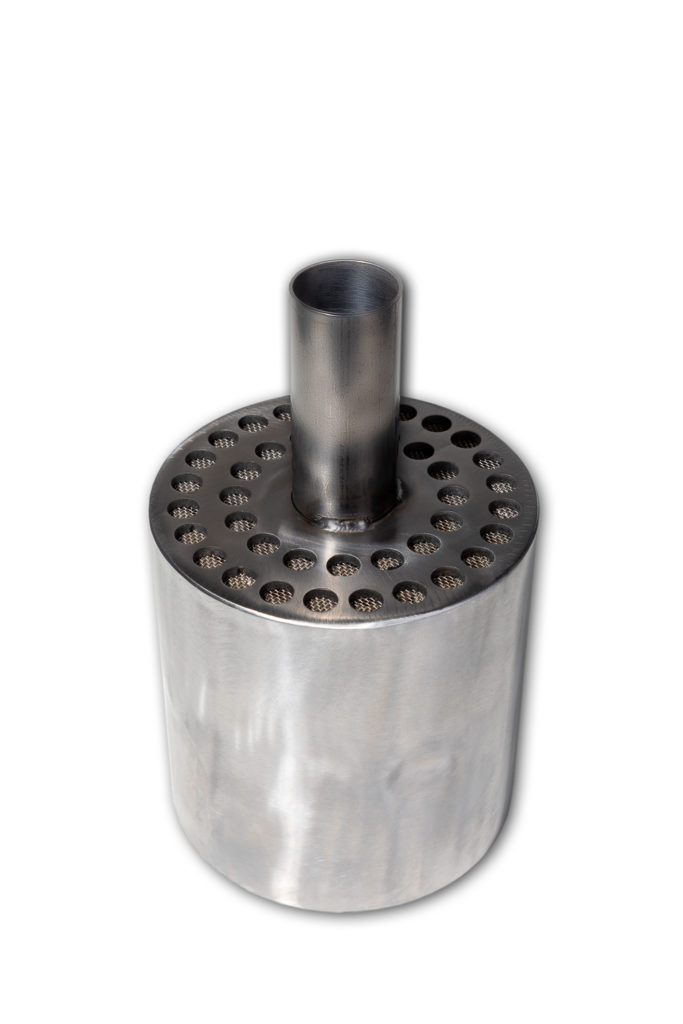 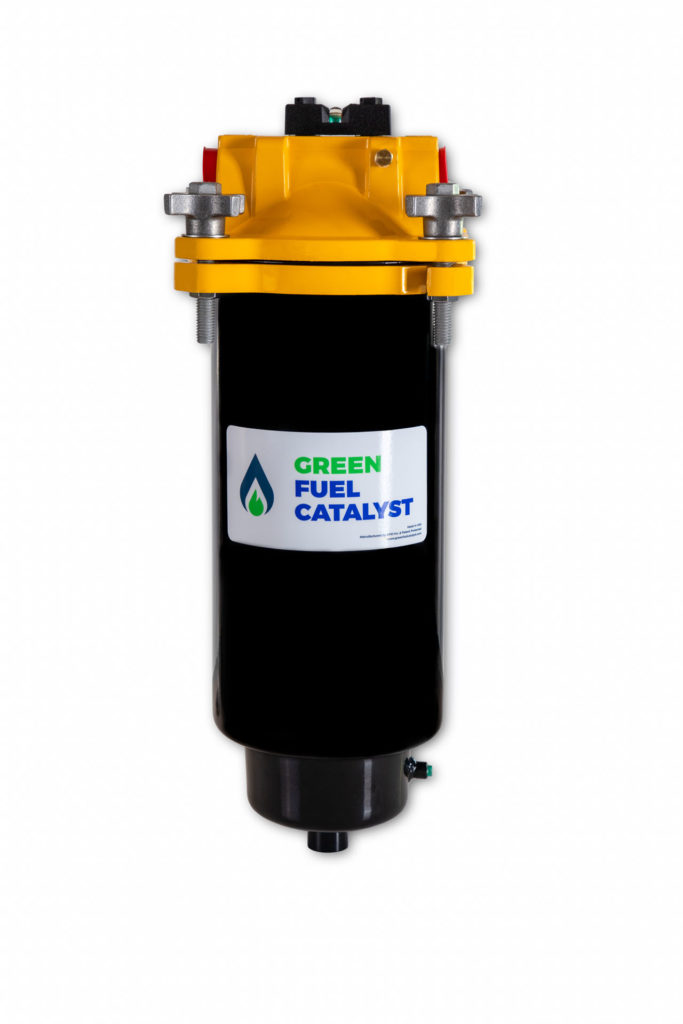 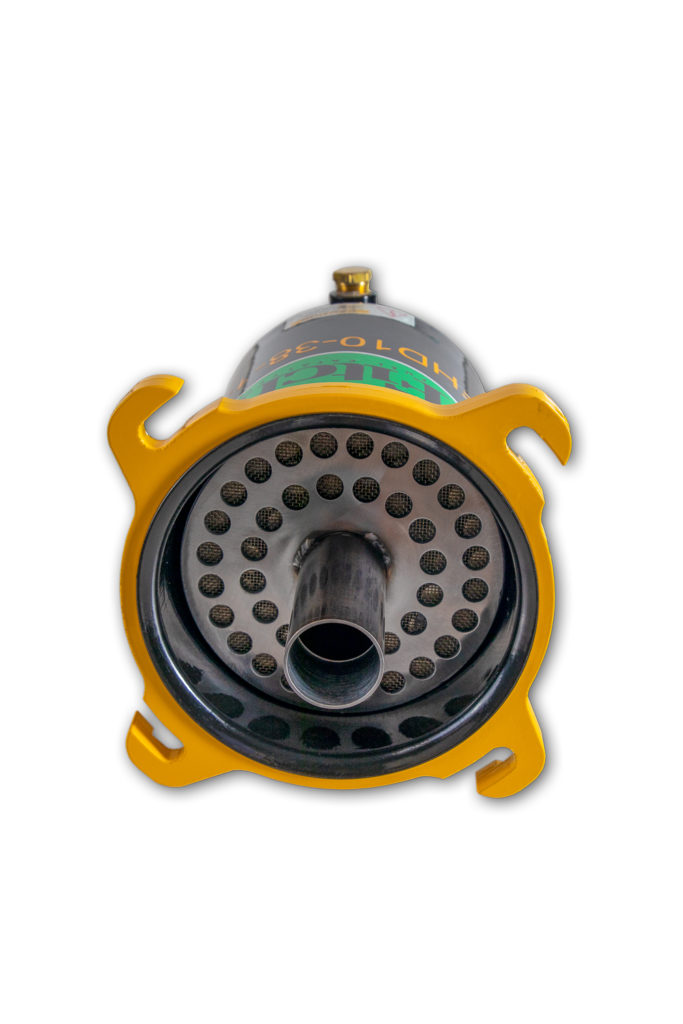 Why do we need to treat the fuel? Engines for marine or power generation needs are designed to run on refinery grade fuel, however, if not consumed immediately, hydrocarbon quality deteriorates and biodegrades. Same applies to the burners in applications for heating and power generation. Hydrocarbon biodegradation is a naturally occurring process that is caused by fuel interaction with oxygen, and water forming various highly stable and thus unreactive compounds. These unreactive hydrocarbons are characterized as Aromatic (benzene ring derivatives) compounds that do not burn well.

Unwanted Oxidation forms various undesirable side products, such as gums, sediments, bacteria, fungi, clad, thickeners, molds which later block filters while also causing fuel starvation. Besides the fuel undersupply the formation of carbon and soot deposits on injectors also takes place due to incomplete hydrocarbon combustion. Lubricity, especially in ultra-low sulfur diesel fuels is also a glaring problem requiring the addition of various expensive additives to improve fuel quality. Lubricity is largely lost at a refinery stage due to the loss of the polar compounds which are destroyed during the sulfur removal process (Hydrodesulfurization). Those highly preferable and combustible polar hydrocarbons contain Hydroxyl, Aldehyde, and Carbonyl functional groups that enhance both, lubricity and fuel combustion efficiency. If such fuel as described above is not treated again it will lead to poor combustion, resulting in elevated fuel consumption, emissions, pollution, and extra maintenance.

How does fuel biodegradation happen? Fuel quality is actively reduced by the unwanted oxidation effect forming fuel degradation products, such as gums, acids, thickeners or sediments to name a few. Water within a hydrocarbon fuel is always actively present and can be had due to condensation effects, delivery from a supplier or because of ingress from the atmosphere (humidity). As long as the water stays below the saturation point and is fully dissolved, it is not causing the worst of the damage. The problem arises when water doesn’t stay below the saturation point in the form of dissolved water, but rather starts to separate from the fuel becoming free or emulsified. That’s when active microbial contamination and fuel degradation starts rather rapidly to take place. Gums are sticky varnishes that contribute to corrosion and injector deposits, causing over or under fueling. Sediments, however, are particulates that clog filters and cause abrasive wear to fuel pumps and injectors, while acids cause corrosion of tanks and fuel systems, leading to hard particulate formation and premature parts failure.

Thickeners, however, increase fuel viscosity, leading to incomplete combustion reaction that ultimately is due to the presence of aromaticity (benzene ring derivatives) within the fuel molecular content. These cyclical or ring-shaped aromatic molecules exert unusual stability and are hard to break apart to react with other substances. Oxidation can take place relatively slowly during long-term storage or be accelerated by warm temperatures, the presence of free water and contaminants. A good rule of thumb is that the oxidation rate increases 2.2 times for every 10 degrees Celsius. Ultimately, if this kind of deteriorated grade fuel is not treated again, it will provide less useful energy, more carbon footprint (soot, black smoke) and greenhouse emissions. Ultimately this also leads to the more frequent need for extra maintenance (injectors, fuel filters), reducing the useful lifetime of the engine, burner or turbine.

Loss of lubricity in the fuel – since sulfur in organic and inorganic forms is the most abundant element in petroleum after carbon and hydrogen its removal during the refinery process is of the essence. Inorganic sulfur, such as elemental sulfur, H2S and pyrite can be present in dissolved and suspended form. Organic sulfur compounds such as thiols, sulfides, and thiophenes represent the main source of sulfur found in crude oil. During hydro-processing sulfur removal, H atoms replace the sulfur atoms, however due to high reactivity the very same H atoms also rapidly react with compounds containing polar functional groups such as alcohols, aldehydes essentially destroying them. Due to the loss of the polar compounds also fuel lubricity is partially lost because these very polar compounds account for a large part of the lubricity within the fuel. In summary, such fuel as described above will cause more wear and tear on the fuel system, while producing more emissions and less useful energy.

What does the catalyst do to natural gas or other hydrocarbon fuels? Catalyst interacts with natural gas enhancing Oxygenation (burning), and in the process is converting the non-methane components into molecules with more oxygen and hydrogen that burn much faster, and cleaner. Likewise, liquid hydrocarbon molecules are restored to more preferable molecular structures that simply burn more efficiently.

How does the Catalyst chemistry of this Onboard ”Mini Refinery” work? Patented Fitch® technology causes removal and redistribution of the hydrogen atoms from the ring-shaped highly unreactive aromatic molecules (benzene ring derivatives), transforming these aromatic compounds into branched aliphatic molecules, which can accept Oxygen atoms more rapidly (oxygenation equals burning). A typical sequence involves aromatic ring decomposition, olefin formation, and then coupling resulting in Oxygen atom containing hydrocarbons. Catalyst induced Olefin formation is a very desirable reaction step due to the formation of the highly reactive Carbon to Carbon double bond (C=C) which plays a crucial part during coupling. Coupling is achieved when hydrocarbons lose H atoms forming chemical compounds that contain Alcohol (R-OH), Aldehyde (R-CH=O) or Carbonyl (R=O) functional groups within their molecular structure. These aforementioned functional groups containing Oxygen atoms (polar compounds) are mostly accountable for fuel lubricity and more efficient combustion. Catalyst, however, reintroduces polar compounds back into the fuel just before the combustion reaction takes place. Likewise, if fuel does not have aromatic molecules but rather its content is made of straight chains or cyclic hydrocarbons, the ability of effective Oxygen incorporation into the hydrocarbons to form the desirable Oxygenates is also measured when catalyst technology is applied. Subsequently, we obtain hydrocarbon molecules that have higher molecular weight and energy content resulting in enhanced combustion reaction and greater energy yield. This translates into more positive work done per the same fuel quantity used. For example, the introduction of Oxygenates such as Ethanol (contains -OH functional group) when the latter is mixed into the fuels, improves and enhances combustion reaction. With Green Fuel Catalyst we obtain the same result only without using any additives.

Catalyst technology has been tested and recommended by numerous various testing facilities including university laboratories, a number of independent engineering test facilities, such as Intertek Caleb Brett labs (for over 130 years testing fuels and their suitability in more than 100 countries worldwide) using ASTM test methods and protocols, a number of other independent performance testing facilities, a number of publications. However, the most important validation and recommendations come from our customers and clients to whom we are happy to serve, providing them with value, and benefits offered through Fitch technology. Below is a small sample of tests and validations.

Research by the Suib Institute at the University of Connecticut (UCONN), USA

In 2012 using Dart Mass spectrometry Dr. Steven Suib and members of the Suib Research Group at the University of Connecticut (UCONN), in Connecticut, USA measured and identified four positive molecular changes that catalyst technology induced in tested fuels. This research was in part, funded by a grant from the United States Department of Energy (DOE).

National Polytechnic Department of Mechanical Engineers – Athens, Greece, a study of effects of the Catalyst technology on the fuel consumption and on emissions of an engine using ultra low sulfur diesel fuel with 55 cetane index.

University of Connecticut: Tests on diesel and bio-diesel fuels regarding the suppression of bacterial growth

University of Connecticut: Tests that identified and measured fuel economy

All of the above ultimately results in improved fuel lubricity and combustion providing fuel savings, reduced emissions and better overall business ROI.

Ultimately, the best confirmation comes from our customers as we are proud to state that over 100,000+ installations in various markets worldwide have already taken place.